Today will “play” with an excerpt from 1984 by George Orwell continued using the GPT-J-6B AI.

The initial excerpt input from 1984 by George Orwell is about 279 words.

The Ministry of Truth — Minitrue, in Newspeak — was startlingly different from any other object in sight. It was an enormous pyramidal structure of glittering white concrete, soaring up, terrace after terrace, 300 meters into the air. From where Winston stood it was just possible to read, picked out on its white face in elegant lettering, the three slogans of the Party:

The Ministry of Truth contained, it was said, three thousand rooms above ground level, and corresponding ramifications below. Scattered about London there were just three other buildings of similar appearance and size. So completely did they dwarf the surrounding architecture that from the roof of Victory Mansions you could see all four of them simultaneously. They were the homes of the four Ministries between which the entire apparatus of government was divided. The Ministry of Truth, which concerned itself with news, entertainment, education, and the fine arts. The Ministry of Peace, which concerned itself with war. The Ministry of Love, which maintained law and order. And the Ministry of Plenty, which was responsible for economic affairs. Their names, in Newspeak: Minitrue, Minipax, Miniluv, and Miniplenty.

The Ministry of Love was the really frightening one. There were no windows in it at all. Winston had never been inside the Ministry of Love, nor within half a kilometer of it. It was a place impossible to enter except on official business, and then only by penetrating through a maze of barbed-wire entanglements, steel doors, and hidden machine-gun nests. Even the streets leading up to its outer barriers were roamed by gorilla-faced guards in black uniforms, armed with jointed truncheons.

And the continuation of the story, with the help of AI below

The Ministry of Love was the heart of the Party’s power, the place where thoughtcrime was identified and punished. It was said that inside the Ministry, there were rooms where prisoners were tortured for information, and others where they were brainwashed to love the Party and its leader, Big Brother. The Ministry was a place of fear and mystery, and it was whispered that once you entered, you would never come out again.

Winston had always been fascinated by the Ministry of Love, in a morbid sort of way. He knew that it was the source of the Party’s power, the force that kept the population in check. He had heard stories of the atrocities committed inside its walls, of the screams that could be heard at night, and the sight of emaciated prisoners being led away to their doom. It was a place that symbolized the Party’s power and its willingness to do anything to maintain it.

As he walked past the building, he couldn’t help but feel a sense of awe and fear. The Ministry of Truth, with its sleek white walls and imposing presence, seemed to tower over him, a constant reminder of the Party’s power. It was a symbol of the society in which he lived, a society where freedom was slavery, where war was peace, and where ignorance was strength.

It was a society where the government controlled every aspect of life, where there was no privacy, and where the only loyalty was to Big Brother. A society where independent thought was a crime, and where dissent was brutally punished. Winston knew that the Ministry of Truth, with its slogans and its power, was the embodiment of that society, and that it was a force that could never be questioned or challenged.

He walked away with a heavy heart and a feeling of hopelessness. The Ministries and the power they represented loomed over him, a constant reminder of the Party’s all-encompassing control. He knew that he could never truly escape their influence, and that his thoughts and actions were constantly being monitored and controlled. The Party’s slogans echoed in his mind: War is peace, freedom is slavery, ignorance is strength. He knew that in this society, they were true and that resisting their power would only lead to his own destruction.

As he walked back to his flat at Victory mansions, he couldn’t shake the feeling of oppression and fear that the Ministries have instilled in him. It was a haunting image of the world he lived in, a world where the government controlled everything and where there was no space for freedom or individuality. He knew that he had to be careful, that he had to conform to the Party’s ideals and beliefs or face dire consequences. He knew that his thoughts and actions were constantly being monitored and controlled, the punishment for disobedience was the imprisonment or death.

He closed the door of his apartment, looking out of the window, the Ministries still in sight, looming over him, a constant reminder of the society in which he lived, and the power it held over him. He would have to be careful from now on, he knew that much. The Party’s grip on the population was too tight to allow for any kind of freedom or dissent.

He knew that his only hope was to blend in, to avoid standing out, and to survive

in this oppressive society. He resolved to bury his true thoughts and feelings deep within himself and to play along with the Party’s lies and propaganda. He knew that it would be a constant struggle, to suppress his individuality and to accept the Party’s control. But he also knew that it was the only way to survive in a world where dissent was not tolerated.

He thought about the society he lived in and the lies that it was built on. The world that Big Brother and the Party had created was a world of fear and control, a world where the government had complete power over the population. It was a society where the government controlled what people thought, what they said and what they did.

He knew that the fight would not be easy but with the determination and unity of all the dissident, they could break the chains of control and build a better world. One that is based on truth and freedom, not lies and control. It will not be an easy task but it will be worth it, if they could ever achieve it. He knew that it was not the time to act yet and have to be very careful, but in the future, there will come a time when the power will shift and he will be ready to join the struggle. 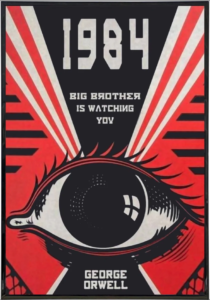 If you like this continuation of 1984 by George Orwell done by AI you can visit this site soon for other books.